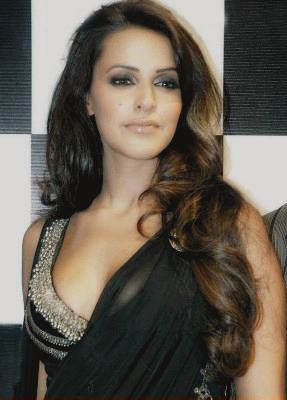 Few years before we have seen her in a movie named “ Phas Gaya Re Obama” in a Ganster role. That role was kind of Lady Gabbar Singh. She was highlighted lightly as a friend of Aishwarya Rai Bachan in the movie Action Replay. 29 th July the movie“Gandhi to Hitler” is going to release we are going to see her in that movie playing the role of Hitler’s Girlfriend and she is Neha Dhupia. Neha Dhupia won the contest of beauty queen in “Femina Miss India”.
She completed  M.A from Delhi University .Her subject as History .She said she don’t  know too much about the Hitler’s Girlfriend as being the student of History. It will be a great challenge for her to play a role like this. She also said that there wasn’t much information about Hitler’s Girlfriend Eva Brown. But everybody who are related in this film helping her to give ideas as much as they can. In this film we are going to see her in western classic dresses and in other dresses too. So, how she is going to make crazy in the role of Hitler’s Girlfriend Eva Brown is what we are expecting?